After graduating from New York University film school (B.F.A), Marc interned at Cabin Creek Films with documentarian Barbara Kopple, director-producer of American Dream (1990 Academy Award, best feature documentary.)  He moved to Hawaii in 1989.  During the 90’s, he worked as a broadcast news cameraman-editor for the CBS and ABC affiliates in Honolulu.  He started producing-directing documentaries independently in 1992 and has been managing a production company, Marc Delorme Productions LLC., since 2005. 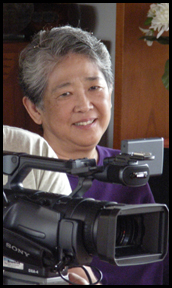 Audrey created and led the Aging-in-Place Network at Yacht Harbor Towers, a Honolulu condominium complex of 456 residential units, from 2005  to 2010.  She was born and raised in Honolulu, but spent her adult life living on the U.S. mainland, Japan, and Thailand.  In 1999, she returned to Honolulu to care for her parents until they passed away in 2002 and 2004.  During that time, she became keenly aware of the challenges facing condo owners who continued to live in their home as they grew older and frailer.  The Graying of Hawaii is her first documentary co-production.